As promised on our previous blog post about Gail’s adventures with puppets, here is the second installment of the journey, Edinburgh: 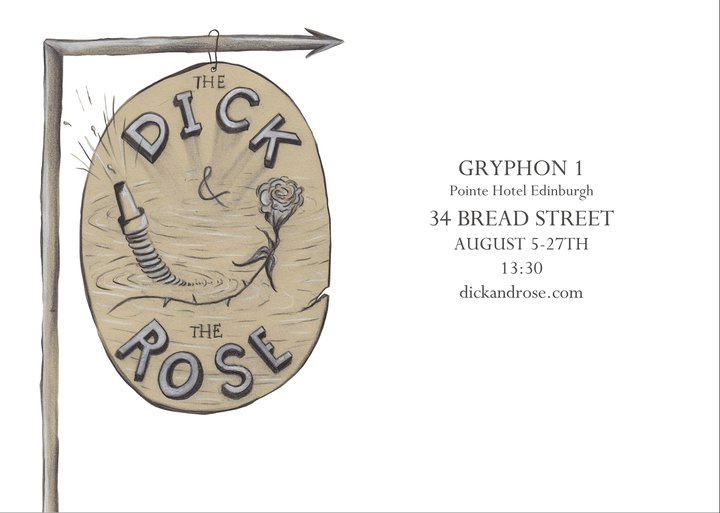 If you’ve ever had the fortune of attending the Edinburgh Fringe Festival you know what a glorious shit-show the Royal Mile is during the month of August (Side note: this chaos goes on for a bit longer than you’d think as in typical Scottish fashion, “the lang Scots mile” [Tam O’Shanter, Robert Burns] stretches approximately 12% further than what we know as a mile in the good ol’ US of A). 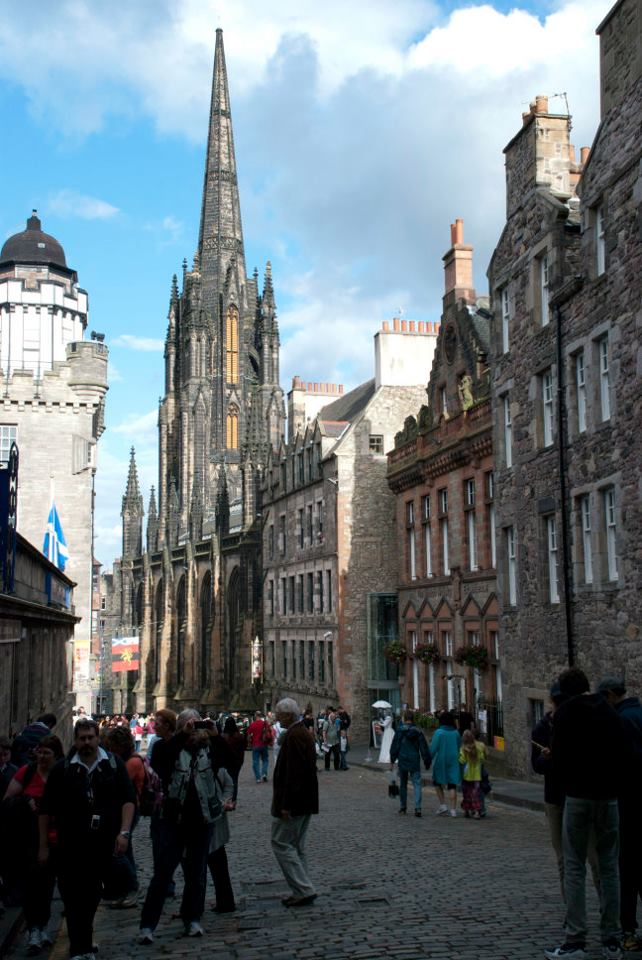 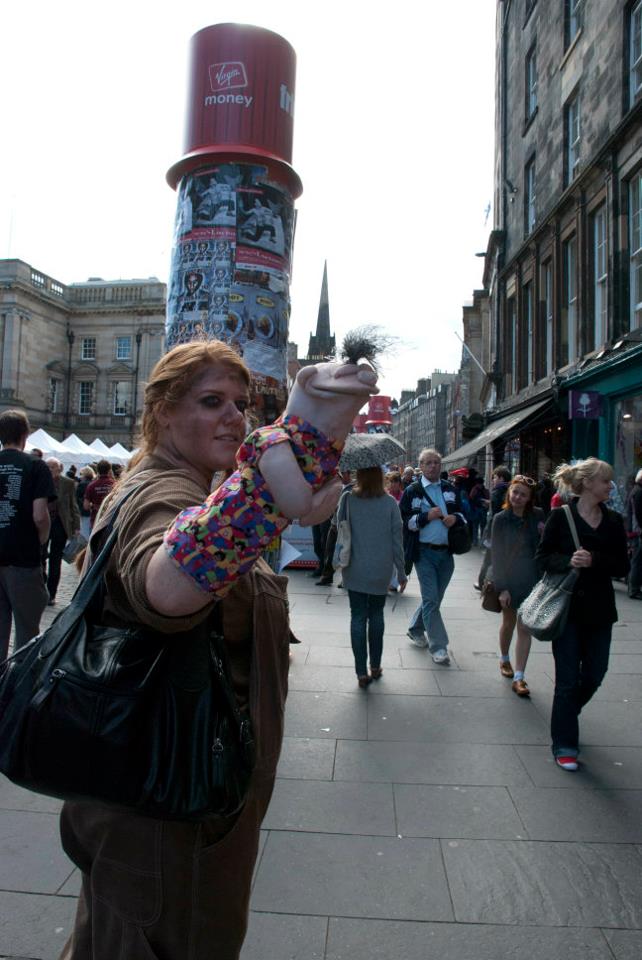 There are people EVERYWHERE: some tourists, some theatre fanatics, some poor locals who didn’t manage to join the annual mass exodus, but mostly performers of all shapes and sizes pushing the crap out of their Fringe shows on the many passers by. It’s a fantastic place to go if you came for the Festival and the measly brochure detailing hundreds of shows with a brief paragraph and tiny image is not offering you enough vivid detail to make an educated decision, or you came to see the sweet little city, but stayed on for a few too many days and have run out of things to do, or if you want to see some previews of what you might buy tickets to like the fabulous La Putyka Circus pulling out their stops on stilts, or discover new favorite bands like The Buffalo Skinners, or you just want to shop around for vested, bearded, talented cuties most likely possessing a delightful accent and then blog about it . 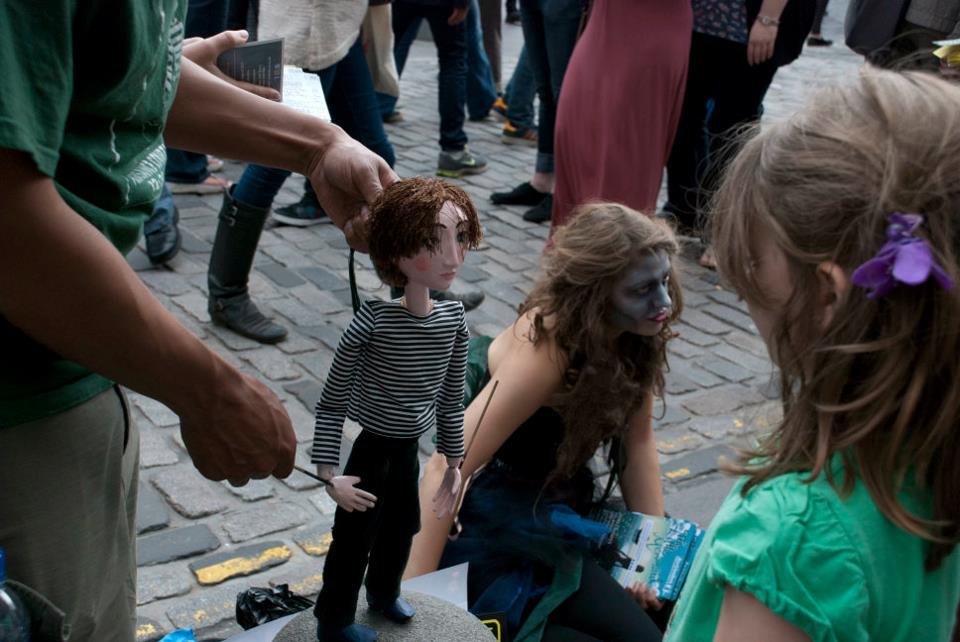 (A fellow puppet on the Mile, photo cred. ESB) 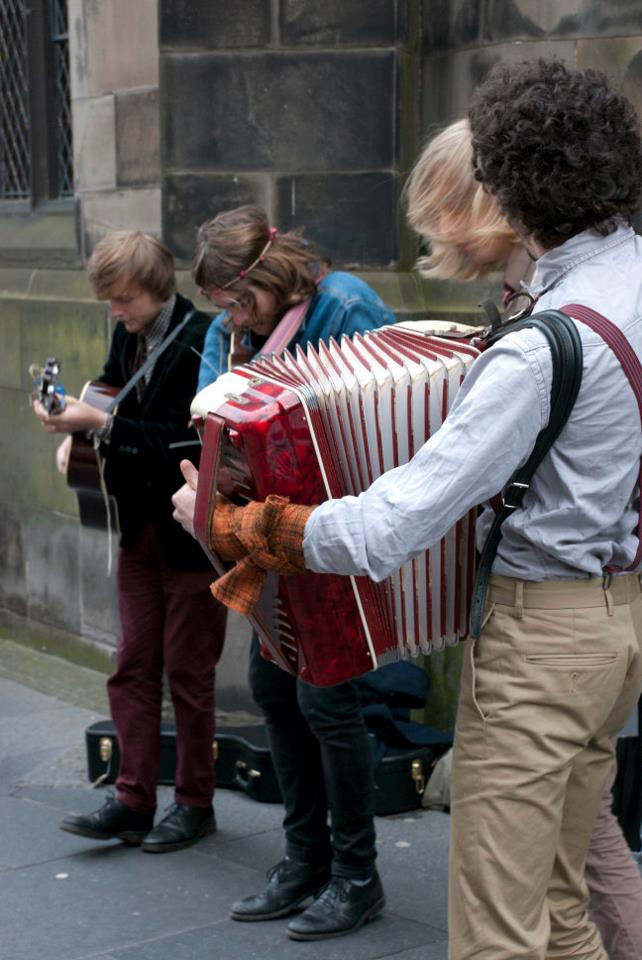 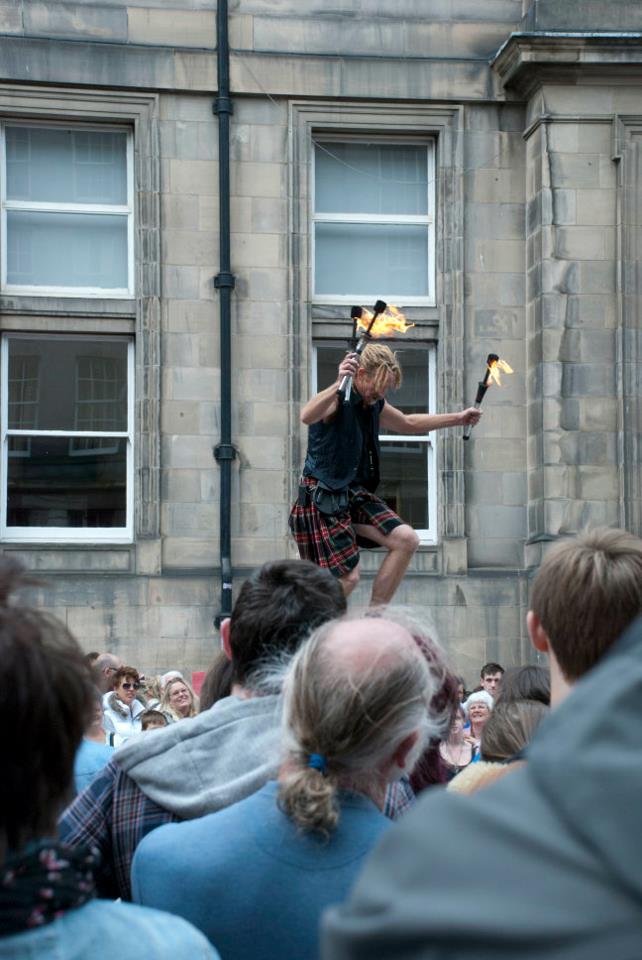 The Royal Mile during Fringe is a lot of things, most specifically chaos, and being asked to busk on the streets in the misty, often rainy, Scottish weather to garner attention for your show can feel like a thankless effort… 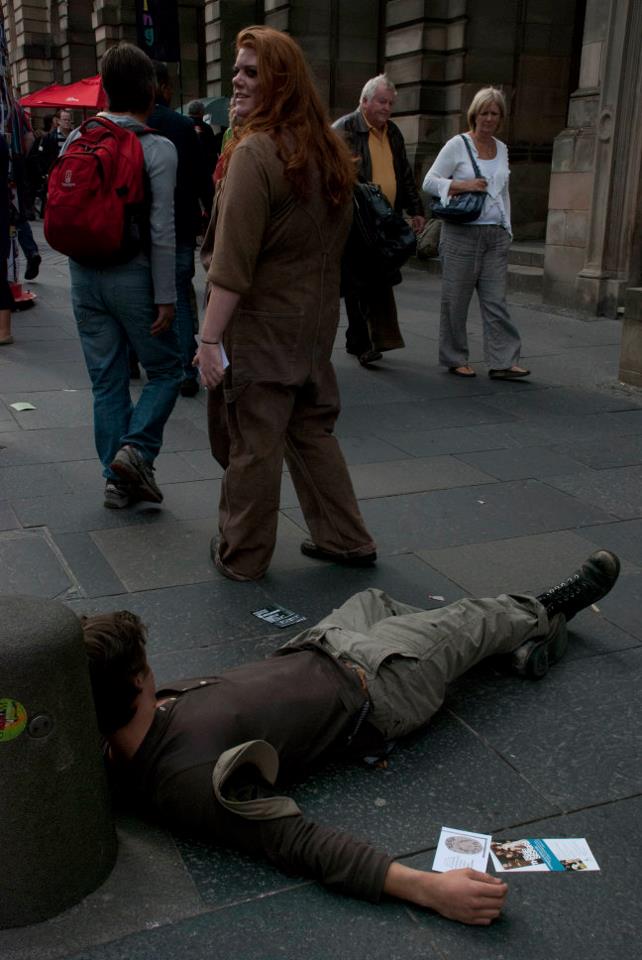 … until you get a puppet. 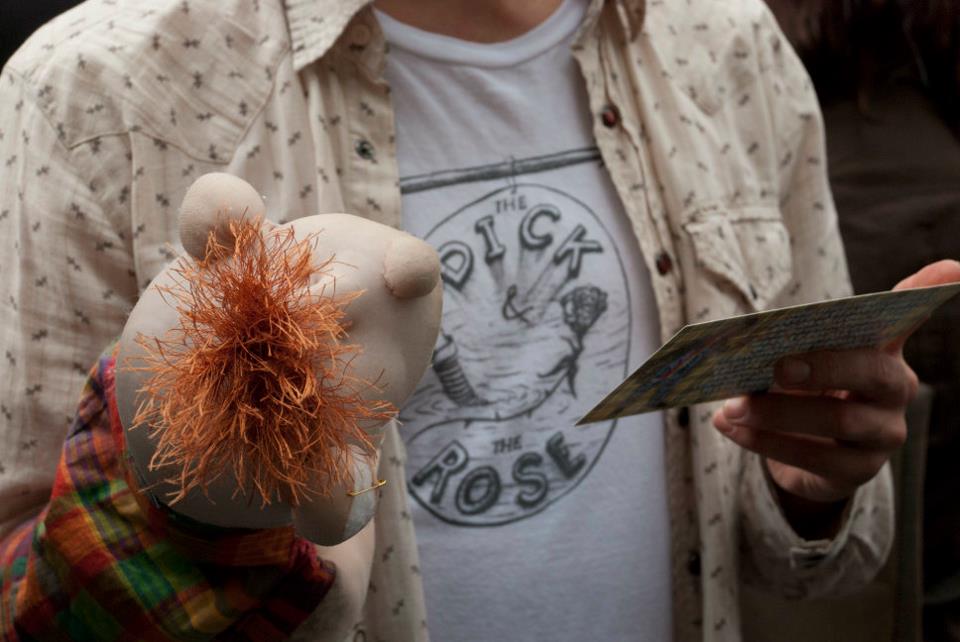 Once we put the puppets on, swarms of people turned heads, stopped to listen, or even have a conversation with Mimi or Mickey or Bob, our little puppet babies. Children were dragging their parents over and we were explaining on repeat that there were elements of the show (such as a 15 ft. long Dick puppet) 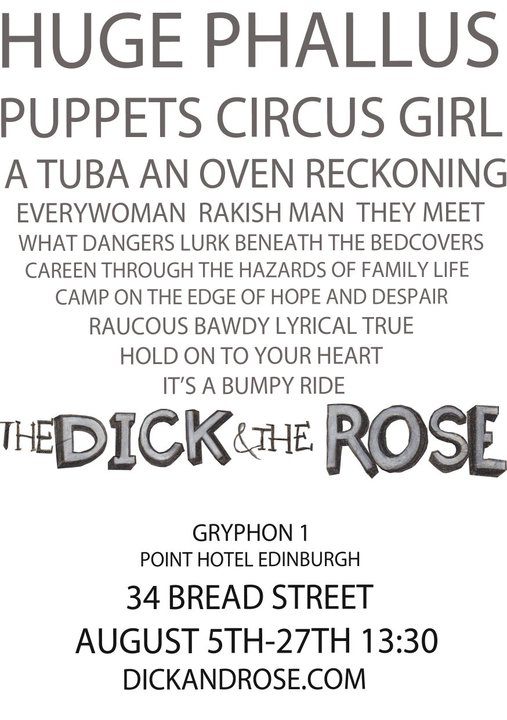 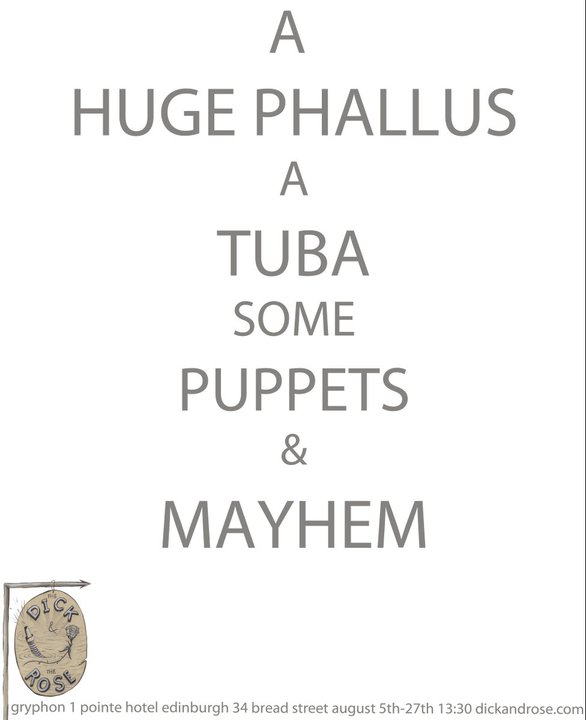 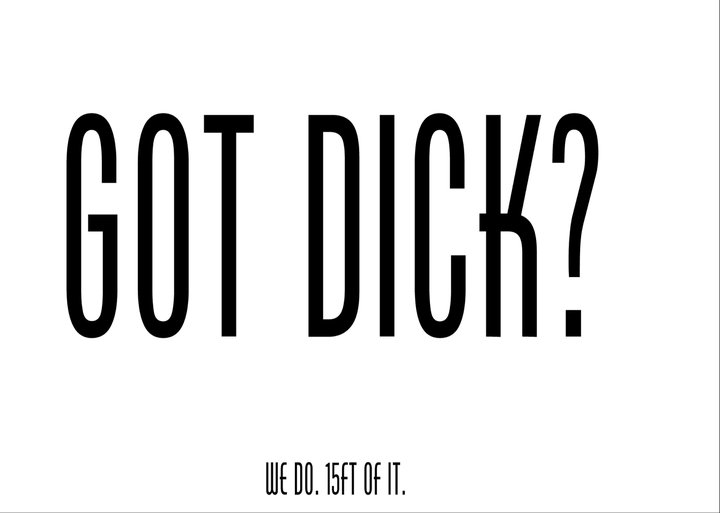 (Some of our flyers we gave out on The Mile, design by Outcast Cafe and ESB)

which may not be appropriate for their four-year old, which still didn’t deter the adorable little girl in a polka dot dress who made friends with Bob and came to visit daily with her grandmother. The work became play, and it was a lot easier to stop feeling like an annoying, nagging asshole, when it wasn’t you who was doing the nagging, but a little, loveable piece of foam and cloth on your hand. 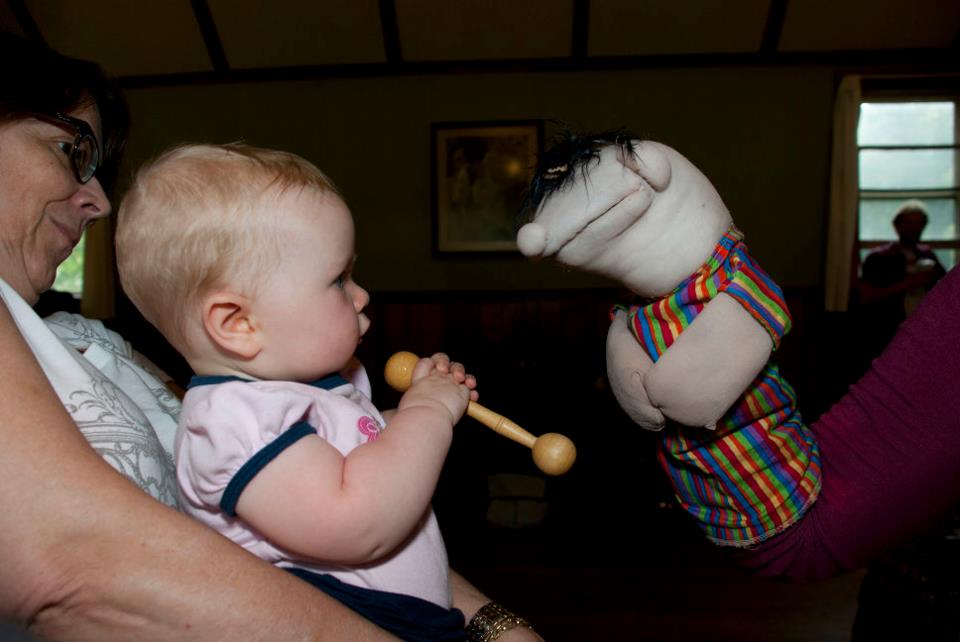 These little buddies not only became the highlight of the show for many, but also became one of our main draws and the some of the hardest workers in our company. I remember the sense of inspired delight when the babies would “pop!” through the drape and ripples of laughter would occur, or later they would meet their short ends when drowned to death, and some would be moved to tears. What had started as a solution to a delicate aspect of our storytelling ended up becoming much more in bringing us a whole new audience, a different sense of charm and reality, and a harking back to ancient themes of storytelling and play, as we tend to do at the Outcast Café.

We belonged to a new club, the unofficial Puppet Club, which would turn out to be one of our best assets in marketing but also a great new exposure to some like-minded artists using like-minded “tools” of storytelling. We saw many fascinating, entertaining, sometimes ridiculous, sometimes incredibly dramatic and moving new works during our month at the festival. The use of music, poetry, dance, projection, and circus arts were all inspiring and provocatively employed. But what stuck with me most, the shows I still talk about, were the ones that belonged to the Club, the ones which utilized the transportable magic of puppetry.

I remember a rainy afternoon in Edinburgh, when most of the cast and crew put on our wellies, or whatever else we were keeping dry with, on and marched down to a vacant lot behind a brick building to discover a rag-tag gypsy tent unfolding off a rickety trailer. Upon entering, we discovered the very stuff of enchanted fairie-folk tales children (and us whimsical adults) only dream of: many rows of closely fitted benches arrayed with multicolored pillow cushions facing a spectacular little stage on which we witnessed the most magical puppet play, Little Matter by The River People. It was an epic coming of age/ morality tale full of whimsy and warnings, and was told primarily by handcrafted pieces of wood, fabric, paper, and other tidbits; secondly by a bunch of talented musically inclined

This was not our only puppet foray at the Fringe. Some of our other favorites were the amazing performances by Blind Summit and Cirk La Putyka.

In Blind Summit’s The Table we watched several pieces of well-sculpted cardboard transform into the crotchety, grumbly, 24” tall little man who promised to perform “the last 12 hours of Moses’s life on top of a table.”

(Our Friend from The Table, source http://trampenau.co.uk)

In Cirk La Putyka’s La Putyka, puppetry played as an element in this circus extravaganza, when a beautiful woman in a red dress, waltzed romantically (and drunkenly) with this “man” here: 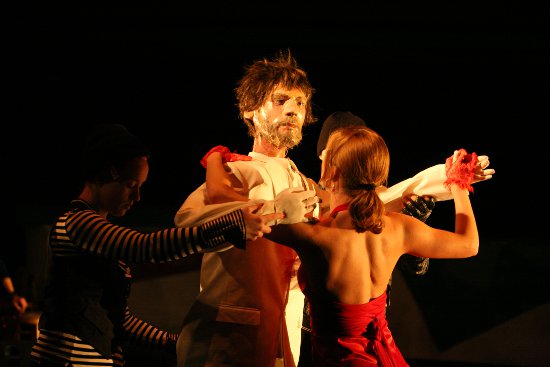 Throughout the witnessing of these mesmerizing instances of story telling, I continued to be surprised by how “real” it all felt. I was stunned by the fact that I felt more connected to the inanimate objects most of the time, than I did the very humans who interacted with or manipulated them. It was in Edinburgh that I first discovered my passionate belief in puppets and forever wanted a membership to the Club. 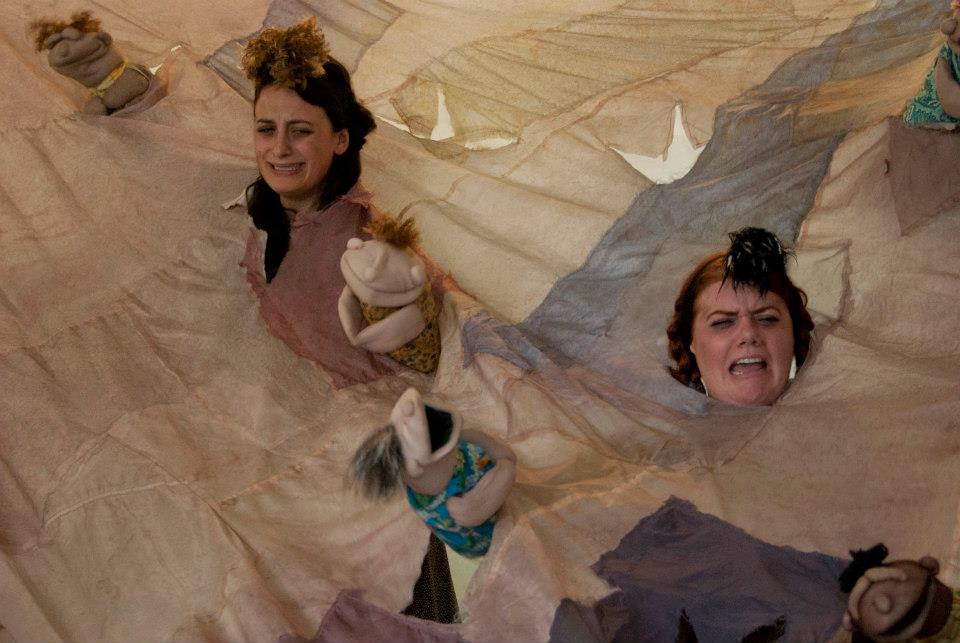