OUTCAST CAFÉ is an ever-changing community of actors, artists, musicians, designers and builders. Brought together to make the plays and movies written by Robert Biggs. Our roots go deep in the oldest oral and visual storytelling traditions, those born of close secrets, whispered around a fire by night. In cave drawings animated by tongues of dancing flame. Practices tried and true. Using tools that leave room for the imagination. . .Song, dance, puppets, masks, objects found and handmade, all serving the story. We are bare bones, traveling lightly, making more of less. 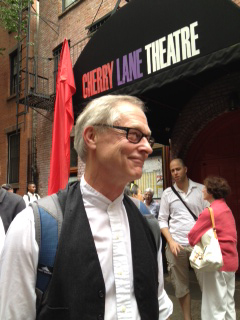 ROBERT BIGGS  is a veteran of Chicago’s Steppenwolf Theatre ensemble, playing Jerry in SAY GOODNIGHT, GRACIE; Phillips in WAITING FOR LEFTY; and Bob in BALM IN GILEAD. He composed music and lyrics for THE ADVENTURES OF MUTT AND JEFF and THE LITTLEST ELF (books by Rob Maxey.) For Shakespeare & Company he played Peter Quince, Adam, Stephano, Gremio, Duke of Austria, Hugh Evans, Lodovico, Feste and Stanley. He also played Estaban/Bernard in the world premiere of Joan Ackermann’s THE TASTER. He directed ShakeSquad & Clown Company, creating BOSUN’S KNOT and THE HISTORY OF COMEDY:  PART IV.

His films include CONTINENTAL DIVIDE, SEVERANCE, SPECK’S LAST and the documentary ONE YEARS CROP, which won Best Documentary at the Embarras Valley Film Festival. Robert is the founder Outcast Café, which produced the documentary and his musical THE DICK AND THE ROSE. It premiered at the Edinburgh Festival Fringe 2011 and played the New York Fringe in 2012. 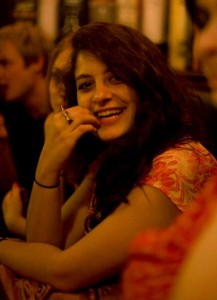 GAIL SHALAN  is proud to be a long-standing member of Outcast Café. Originally from
Berkshire County, she now resides in Boston, MA. Some favorite stage credits include Paulina in THE WINTER’S TALE, Woman 1 in Exiled Theatre’s premiere production of shorts: STRANGE DAYS, Lelly Santiago in WELCOME TO ARROYO’S, Laura Vaughn in COURTSHIP, Alice Paulson in THE INCIDENT WITH THE MUD, Iago in OTHELLO, and all of her adventures with Outcast Café, especially their travels to Edinburgh Fringe in 2011 and NYC Fringe in 2012.  She starred as Riley Ann/ Coyote in the short film COYOTE GIRL, also with Outcast Café.

A graduate of BU’s Acting Conservatory (from which she also holds a concentration in Shakespearean Lit) and LAMDA, Gail has also trained and worked with Williamstown Theatre Festival, The Old Vic’s Old Vic New Voices program, St. Ann’s Warehouse’s Toy Theatre Festival, Shakespeare and Company,  Berkshire Theatre Group and more. Gail also works on film, as a puppeteer, and as an audiobook narrator. She believes in following her joy and telling great stories. Visit her website www.gailshalan.com for more.