Hey everyone! We’ve been blowing up our blog, Facebook page, Instagram and Twitter accounts with a lot of wonderful and nostalgic images of the 2011 and 2012 The Dick and The Rose tours. Just in case you were curious about who’s in the pics, who made the puppets, set, choreography, etc…. We do have a page on dickandrose.com that features most of our previous collaborators. Check it out: http://www.dickandrose.com/who

Here’s to you Dicks and Roses! We love you! 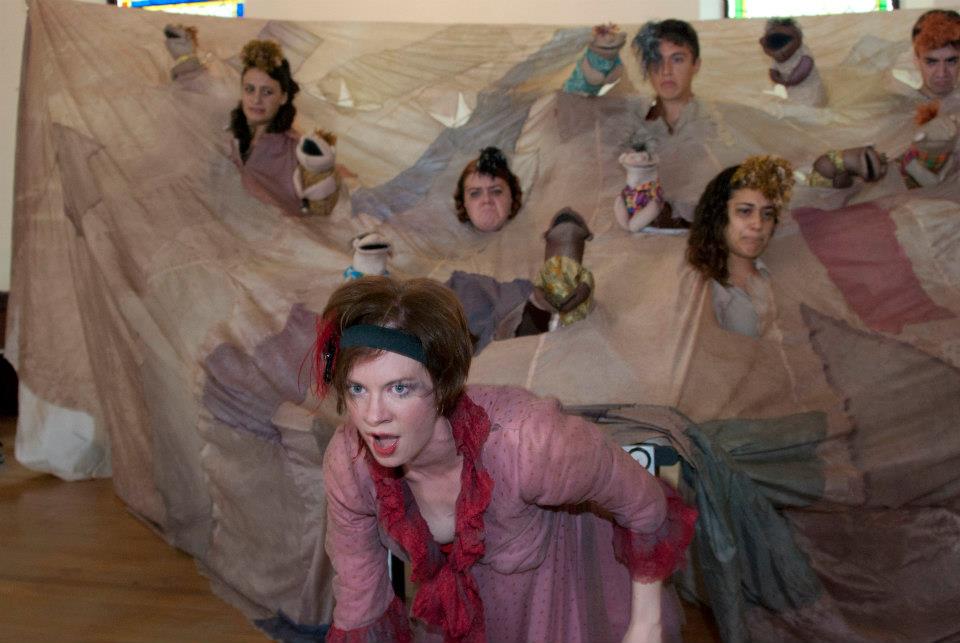 This month we are very excited to feature some local #inspiringfellows coming out of Boston University’s BFA Theatre Arts program this Spring. Scaramouche Jones—performed by Kelsie Hogue, directed by Amelia Cain and adapted as a team for their cumulative theses—played last weekend at Boston University’s “Jewels 1” Miller Studio Theatre 352 at the College of Fine Arts on 855 Commonwealth Ave. 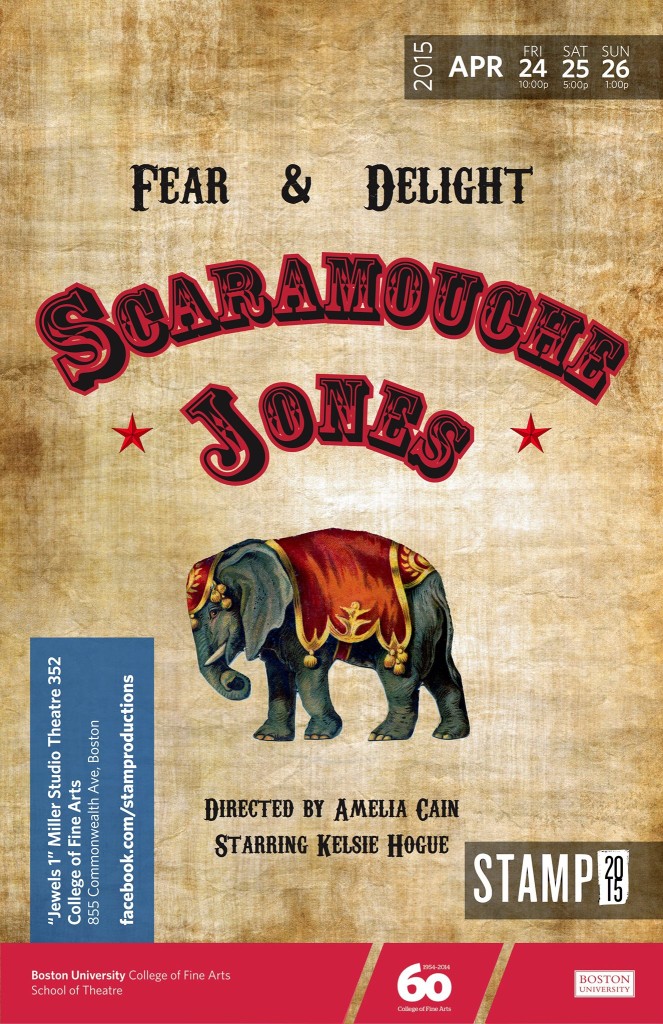 Scaramouche Jones originally came to be as a one-man show devised by British actor, writer, and dramaturg: Justin Butcher. He created this whimsical, biographical clown’s tale for the Old Vic Theatre and, with the aid of the late great Pete Postlethwaite, brought it to many astounded audiences, including our friends in Edinburgh about ten years ago (Source: Amelia Cain).

Evoking the beloved “Raucous. Bawdy. Lyrical. True.” tagline assigned to The Dick and The Rose, our #inspiringfellows took Butcher’s piece as inspiration and adapted it into a dynamic, heart-wrenching, evocative piece of one-hour entertainment true to everything that we at the Outcast Café love about theatre. Every element of the production offered a detailed and elegant articulation of a world that only served the story of the self-ordained “Pierrot” known to us as Scaramouche Jones.

The tale spans the entire 20th century from Scaramouche’s birth in 1899 to the day of his death upon which we meet. From the delightful pre-show of two Commedia-style lovers (decked out in ambiguous, artfully stained, early-20th century garb) chasing each other about the lobby (complete with big tent Admit One tickets and an active popcorn machine, inspiring a complete sensory experience) to the marvelously draped cloth and soft hanging circus bulbs, suggesting a tent above a hodge-podge of wooden chairs and antique trunks, we are doused immediately in a Sepia-toned atmosphere of the past.

The well-articulated aesthetic held true throughout the piece, but never in a distracting way, only in pure service of the play. All of the carefully placed, and incredible creative,  decisions—presumably lead by Ms. Cain—did nothing but tell the most honest of stories. Cain ‘s brilliant team must also be commended. Not a single talent goes to waste. Precise lighting (senior lighting student Andy Auyong), aforementioned gorgeous and illustrative costumes (senior costume student Emma Connelly), an inspiring set (sophomore design student Fiona Kearns) and the incredible ensemble support of two eager freshman (Kyra Tantao and Jake Cohen) breathe the utmost life into their required Stage Craft assignment: the dynamo driving Scaramouche Jones plays on the strongest of foundations.

This brilliant and most brave of Fools is the unparalleled Kelsie Hogue. Not only did Hogue compose and write over seven original songs for the piece, and performs them live on multiple instruments (you know how we feel about that kind of a thing), but she deftly, and fearlessly, takes on the role of Scaramouche himself. Delighting us, engaging us, amusing us, breaking our hearts sometimes, Hogue had no reservations about owning the most powerful element of live theatre: the relationship to the audience. She told the story with clarity, wisdom, and open ears to a very receptive opening-night house. Hogue plays with just the slightest air of self-awareness that doesn’t detract but rather wisely acknowledges the house she plays for (a raucous body of fellow students, for the most part), as well as her own age and gender twist on the piece almost in an act of full disclosure so that we may immerse ourselves in the story free from irrelevant distractions.

Each note of her performance leads us through a maze of honest emotion.  We uproariously laugh at her masquerade as a lascivious Italian prince serenading us with an operatic aria whilst pretending to rub his one-eyed snake into the first row of the audience. She recounts Scaramouche’s haunting days as a gravedigger in Nazi Germany, using her majestical guitar as a callused shovel, and then singing an overture of “I’ll make you laugh until you cry” with such purity (and lack of selfish sentimentality) as to induce a shocking catharsis. She encompasses all the “fear and delight” of the ” 50 years {it took} to make the clown, and {the} 50 years {there were} to be the clown”.

Join us in celebrating our April #inspiringfellows by keeping up with these up and coming stars on twitter and browse their websites here:

Courtesy of one of our original Ministering Angels, Dylan Wittrock, we are happy to send you on a journey down memory lane. Here is a compilation video of our promotional efforts on the Royal Mile at Edinburgh Fringe 2011, shout out to Bob and Mickey for all their hard work:

Outcast Café is hard at work on our future projects. Our team is spread far and wide right now (and so is our film Coyote Girl) before we come together again early this Spring to start work on the next installment of Robert Biggs’ original works. We can’t wait to tell you more about are plans for the Spring of 2015, but first lets all go back to some past adventures in a little image throwback. Enjoy!

Hey, y’all, sorry we missed January! We were busy making the movie Coyote Girl, or hadn’t you heard? While we garnered much inspiration from the expansive Heartland and the howling coyote friends, we didn’t get out to see much. Luckily, we were tipped off to a very cool puppet happening that took place at the Woolly Mammoth Theatre in DC by DCist contributor Anya VanWagtendonk (read her article here) while we were half-way across the country making our cool puppet happening. Over the holidays, Woolly Mammoth hosted our #inspiringfellow of January & February: The Old Trout Puppet Workshop:

We feel particularly inspired by this odd and fantastic self-proclaimed: “motley gang of artists churning out ideas for a whole heap of unlikely things: puppet shows for adults and children, sculptures, films, music, books, plays, paintings, and pedagogy.”(source) The show that VanWagtendonk shared with us, Famous Puppet Death Scenes, is a celebration and exploration of the fears, anxieties, and curiosities we have about death through the safe and illuminating medium of puppetry. In a very puppet-y way, the show turns these horrors on their heads and into joy and amusement… the ups and downs of which we at Outcast Cafe know well from our work on The Dick and The Rose.

But we also feel akin to the Old Trout folk, in their beautiful exploration of puppets on film, their ambitious world travels, and of course, their broad exploration of the light and dark, the holy and bawdy, the ins and outs, the passage through the veil.

Old Trout Puppet Workshop, we salute your detailed and gorgeous bravery in storytelling and look forward to taking in a show down the road! Thanks for the inspiration, #inspiringfellows !

Check out this stunning music video they made for Feist’s song “Honey, Honey”:

Can’t get enough of them…Although we may have missed the U.S. leg of the run, if you are interested in catching Famous Puppet Death Scenes, the show is still touring in Canada and here are the dates I pulled from their website:

Find out more about their past and present work, and about where to see it at their website: http://www.theoldtrouts.org/index.html

As Coyote Girl’s post-production phase comes to a close, and we prepare to submit to festivals, we are happy to share this little sneak peek behind the scene shot with you! Take a look at Outcast Cafe recording the  cello soundtrack (Composed by Robert Biggs and performed by Jonah Thomas)

One of the best parts of being at the Edinburgh Fringe in 2011 was all of the amazing and inspiring theatre going on all within a few miles of each other, a walk-able smorgasboard. You could pick whatever you wanted. And although the world isn’t as conveniently smushed together as that blossoming month of creativity, Outcast Café continues to discover truly inspirational fellow artists making the kind of theatre and art that we can really get behind, the kind that lights a fire in our hearts and under our butts. This post marks the first of our monthly blog trend: #inspiringfellows 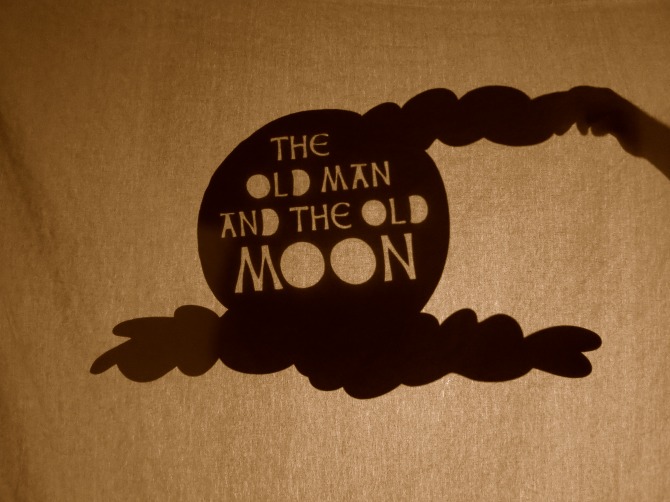 Our #inspiringfellows this month are the Pigpen Theatre Co. and their gorgeous show “The Old Man and The Old Moon”. In their first year at Carnegie Mellon these seven talented storytellers and musicians, came together for a devised side project and have stuck to songs, shadow puppets, simple tales and each other ever since. We love their sense of play and clarity of storytelling, their clever use of beautiful and original music, and especially their inspiring use of shadow puppets. Check them out: www.pigpentheatre.com & @PigPenTheatreCo 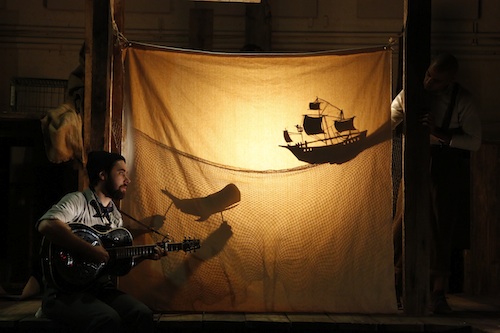