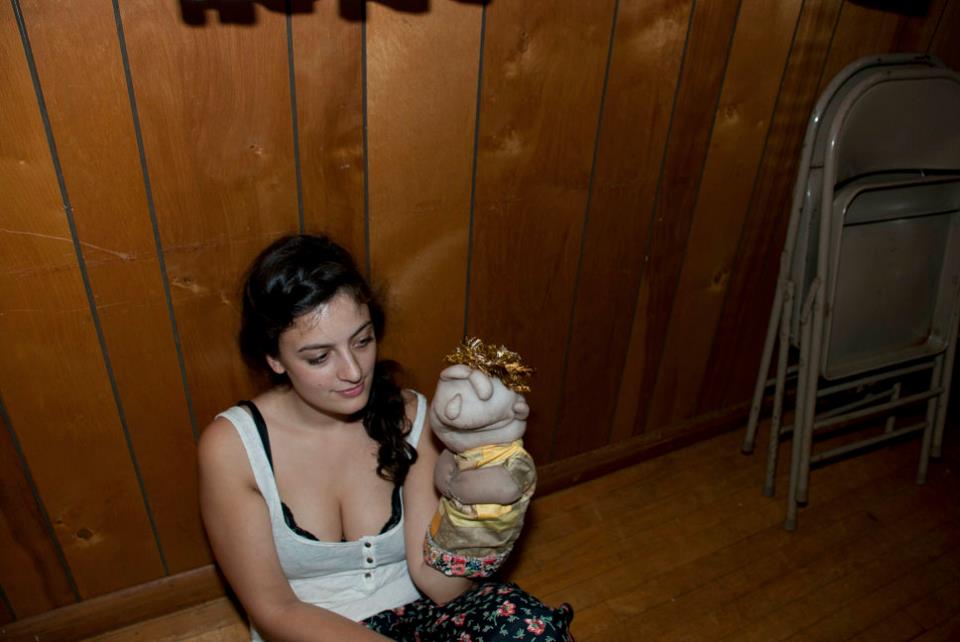 (Mimi and Me in rehearsal in S. Lee, MA, photo credit Emma Sims-Biggs)

Three years ago, rehearsals began for The Dick and The Rose. I showed up for rehearsal in an old church in Lee, MA with the promise of puppets and was greeted by a bag full of white socks and a bin of magic markers. We were told to put the sock over our hand, hold it so that we could make it talk, and look for the face; then draw what we discovered onto the sock. This felt goofy, fun, juvenile, and ultimately, to quote one of my favorite acting professors, a little “fake-it-till-ya-make-it” in nature.

What then proceeded was a phenomenal discovery of the delicate and magical manipulation that happens both from within and from somewhere completely outside of oneself to bring an inanimate object to a free, vibrant and animated life. The only other times in my life I could equate this experience to, were studying the liberating art of mask during my training at LAMDA and BU, and to the early days of play in my imaginative child hood. It was a time when my playmates consisted of about fifteen Beanie Babies who fully functioned with illustrative personalities for an audience of two; my patient little brothers.

The plush creatures’ personalities were so distinct, that for years, I never forgot the cadence of a voice, the history of emotional moments in their little lives; I definitely had many a conversation with them, even when no one was there to listen. And, undoubtedly, this lasted a little longer for me that for most, after all, I still do it, but it was a universal experience, something children all over the world for years, and years, and years had experienced.

So, after allowing the inhibition and judgment of being a socialized adult to pass, we listened, looked, and allowed creative inspiration to flow through us; for the “puppets” to show us their hidden voices, thoughts, and personalities. Then, after paying close attention to the sock at hand (literally), our “puppets” were allowed to interact with the other puppets on other players’ hands.

Eventually, our fabulous puppet designer, Jim Day, brought in about six different hand designed puppet babies, that each came in three iterations of themselves at different ages, which sat inside of themselves like little nesting Matrushka dolls. We ceremoniously revealed the babes to ourselves and the rest of the company and allowed these pieces of hodge-podge fabric, foam, and thread to introduce “themselves” to us. 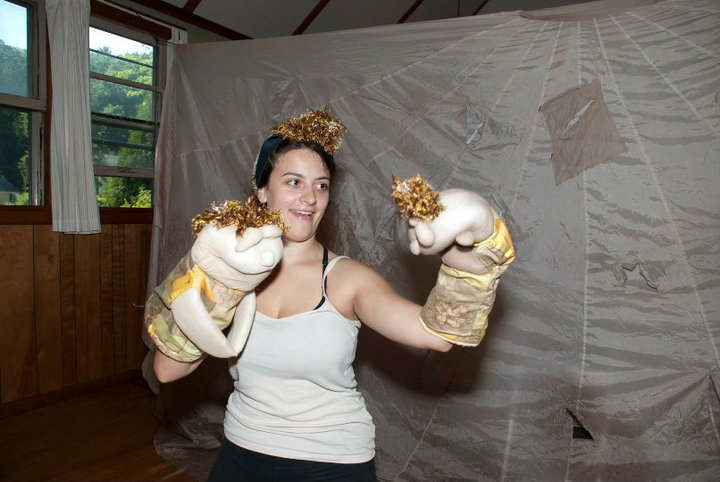 These little pieces of magic stayed with us every day through rehearsals in the hall, at our previews to Shakespeare and Co. and The Topia Arts Center, and eventually were road warriors stuffed in a suitcase on their way to Scotland. They then functioned as our primary source of audience heckling for the duration of our month in Edinburgh. But the story of Scotland is a whole other tale for another day. As is the continuous presence of puppets in my life and in the growing lives of the many stories told by the Outcast Café.