January has been an amazing month for Outcast Café! We have spent the past two and a half weeks officially entering the production phase of making our second short film, Coyote Girl, the poetic version of the 90 minute play script Riley Ann Visits the Outcast Cafe. After spending about two weeks on location in Westfield, Illinois the team has dispersed and continues to work on post-production for the film as well as upcoming projects for the company. Here is the next installment of our adventures on location from the perspective of company member Gail Shalan (Riley Ann, Coyote) :

11:55 a.m.- After waking at 8 and realizing I’m the last one down for coffee, I observe that we are now on “farm time”. We rise, and sometimes set, with the sun here. Sims, Biggs, and I (joined by David) head out to the neighboring Casey (pronounced “KAY-zee”), home of “Big things in a small town” for a few errands and lunch at the Whitling Whimsey Cafe.

1:05 p.m. – Officially small town living, David and Robert know everyone in the cafe we ate lunch at. Being a Berkshire bean myself, I am well versed in such familiarity. The Whitling Whimsey is home to not only “over 100 items that begin with ‘W’ “, but also the World’s Largest Wind Chime. The town also holds the World’s Largest Knitting Needles, Golf Tee and soon to be Rocking Chair as it’s claim to fame. After playing tourist, we stop by the Dollar General and some other locations in desperate search of a flash drive, amidst other last minute necessities.

1:36 p.m.- We fail our Mission Flash Drive and decide to try Walmart in Charleston later on. Biggs stops in one of the many local banks to transfer funds. I follow. Did you know that Riley Ann works in a bank? Character research!

3:31 p.m.- As Sims and Biggs head out for Walmart and Terri begins to cook us a lovely feast, I get some down time to journal about my experience so far. I also take COYOTE out of the suitcase and we work on our scenes a bit.

5:45 p.m-  We all sit down for a wonderful family meal at Terri and David’s, enjoy each other’s company and conversation, and retire fairly early. Although we were expecting Rick Sands (Director of Photography) and Terry Holland (Art Director) to arrive at the Home Place tonight, they’ve been held up on their long drive and will arrive in the morning. 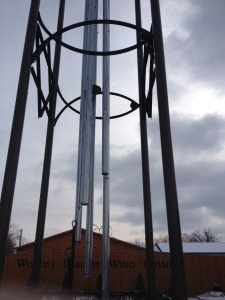